Exactly a decade ago, I attended my first fashion week as a student. The vivid memory of dressing up in a black cocktail dress during the daytime and putting on stilettoes a size too big, still makes me cringe. Even though I was seated in the 5th row, I remember feeling a sense of euphoria. I may not have witnessed any fashion that day (bobbing heads of the models don’t exactly count), but I got to be a spectator of an industry I wanted to be a part of. The disparity between the outsiders and the insiders didn’t just limit to the distance between their seats—it was also about elitism. The editors, journalists, buyers and social celebrities were the crème de la crème in the crowd back then—the fashion cliques were sacred, mainly because of their credibility and cut-throat observations and critiques. 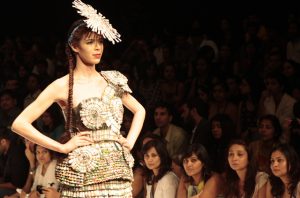 10 years later, as I sat front row (thanks to my cushy publication job)—I witnessed that so much has changed, but many things have remained the same. Fashion has become inclusive and welcoming on and off the ramp—but in hindsight, it has replaced editorial prowess with a content gimmick. Journalists with insightful words and knowledge of business analysis are sidetracked by fashion bloggers and their twirling reels. While internationally, models are the real MVP of a show—in India, we still need celebrities and influencers as showstoppers. It is no longer just a tasteful fashion presentation described eloquently through the power of words and strongly captured imagery—sadly, the PR machinery for labels is now fuelled by tractions numbers and impressions. Whatever happened to a solid, earnest, unbiased review? One that could not be bought or turned into a transition reel. For someone who firsthand witnessed this change of scenarios, it isn’t an us vs them—fashion is a large pie – the problem is that it is currently divided unequally and a big piece is being overwhelmingly occupied by individuals whose focal point lies in gaining followers rather than showcasing fashion without a transactional interest.

In all fairness, while the social media coverage was loud and repetitive, the written pieces were far and few. Was it because of the lack of journalistic representation in the front row or because intelligent content opportunities were sparse due to every second designer’s sponsored affiliation? Senior fashion journalist and author Sujata Assomull may be based in UAE, but she always has a watchful eye when it comes to Indian fashion. Sharing her views on the subject she said, “For someone who has attended the first fashion week and many more after that, I know that the eco-system has changed. While I may not be present there, I’ve keenly been observing the shows and have been updating myself from the on-ground journalists. There are new stakeholders of the event, hence the journalistic approach in terms of smart content seemed missing. Besides that, as much as we love a good show for its fashion, it all boils down to business. Where were the buyers this season? What was the business approach to the event? Since we were returning to a physical format after two years, certain details should have been better ironed out. Although there were some applaud-worthy presentations and moments, one cannot deny the many loose ends that were witnessed.”

Although, credit where it’s due—Indian fashion is slowly but steadily heading in a diverse direction where it celebrates different body types, genders and ages beyond its tokenistic approach or without singling them out. Besides ramp regulars like transgender model Anjali Lama, the catwalk this season was opened for body-positive models like Apoorva Rampal, Geetanjali Adhikari, and designers like Tarun Tahiliani and JJ Vallaya discarded the conventional modeling age bracket and welcomed Interior designer Vinita Chaitanya and former model/air hostess Binita Rawley to walk for their new lines. Props on changing the norms and materializing conversations into action, but the lack of visibility might just defeat the purpose. As I began collecting my research material for this article, I faced a roadblock as none of the models or newer talents were tagged on social media—neither by the brands nor by the organizing platforms. It’s about time we start treating models in India as more than just live installations—and this goes out for publications (including us) media houses, labels and talent management agencies.

Speaking of newer talent and paving ways, while documenting the backstage action, I spoke to model Roselynn Raj about her experience this season and her opinion on the visibility debate. “This is my 3rd time walking for Lakmé Fashion Week and first time in a physical format. I came in with the hope to represent my skin color and individuality, which is panning out seamlessly for me. A diverse set of Indian models are finally being given a platform, thanks to social media. As far as recognition is concerned, fashion works like a circle. Designers display their clothes on models, models take them to the runway and then the influencers/celebrities take them to their audiences. As long as this chain is intact and nobody is overstepping, there’s room for all.”

Models may finally be getting their due, but can we say the same about the other backstage crew? For someone who has seen both ends of the spectrum as a student and now as a professional—fashion weeks are built on the shoulders of the people working excruciating hours behind the scenes. From choreographers and technicians to show coordinators and model managers—A 20-minute catwalk looks dreamy because these individuals put in the manpower. Shifting the focus from the designers and their muses for a bit, we shed light on the unsung heroes and the crucial parts they play during the fashion week.

What does it take to orchestrate a perfect fashion show? The clothes? Models? Designers and muses? Or the sets? It’s all of the above, but the binding agent here is the show director. Without great choreography, even the most striking ensembles can fall flat. With almost 10 years of experience under her belt, Vahbiz Mehta is one of the seasoned show directors at FDCI x Lakmé Fashion Week. In an attempt to decode the method behind the madness, we quizzed the choreographer herself to understand her job better and what keeps her going regardless of the limited gratification that comes with the role. “When it’s a blackout and everyone at the console acknowledges that it was a powerful show, that’s all the gratification I need. My job is to bring the designer’s vision to life however improbable it may seem at times. When I achieve that, I know that I have delivered a dream come true, and making dreams come true is the most potent gratification for anyone.”

Daman Deep Singh Chaudhary has been a model manager for a decade—besides managing talents and averting crises, Daman is known for his flamboyant social media game. For a job that turns day into night, finding on-ground entertainment is essential. Between creating schedules, hiring new faces, taking care of models in all pools and making sure everything functions like a well-oiled machine, I caught him for a moment of quick chat. Purely from a spectator’s point of view, his job is indispensable but thankless, “My job in itself is gratifying for me, it may not give me the recognition in terms of the outside world, but the industry appreciates and recognizes us. Working hours for an event of this magnitude are usually long, but that’s a part and parcel of event life,” adds Daman. The front side fashion narrative has shifted over the years and has become more welcoming, but has there been the same degree of evolution behind the stage? Answers Daman. “Green rooms were usually female-driven, the fact that being a boy I was given my space speaks about fashion’s forwardness before time. Of course, there’s always room for improvement in terms of better payment and more visibility, but steps in the right direction are being taken.”

When I started writing this story, I wanted it to solely be an opinion piece based on my experience of fashion week. Along the way, I spoke to many insiders and realized it was important to highlight the good, bad and work in progress—which isn’t possible from a one-dimensional standpoint. Despite the fact that there were glaring glitches—reduced media participation, an influx of influencer marketing, lack of buyers and business-building opportunities, the benefits of the FDCI x Lakmé Fashion Week outweigh the downsides. Not only is it the sole platform that provides a launchpad for emerging designers, but it also supports indigenous crafts and promotes sustainability with a transparency scanner. As for the coming season—I hope to witness more fashion less fluff, more opinionated voices, fewer entourages, more imaginative collections less repetition, more craft and craftsmen less blatant sponsored infusion.

The Best Turkish Fashion Brands To Know Now (And Forever) –

Seattle Is a Fashion Capital: The History of Its Grunge, Gorp, and Graffiti Scenes – Esquire

We love WordPress and we are here to provide you with professional looking WordPress themes so that you can take your website one step ahead. We focus on simplicity, elegant design and clean code.